This is my last year in university, and for my end-of-degree project I’m investigating the use of SDR (Software Defined Radio) to intercept and attack insecure radio communications.

The initial applications I had in mind were just to intercept wireless keyboards and mice; but that work has already been done, so I decided to give it a more broad scope and to study all radio communications, including garage remotes, wireless keys of some cars…

For now, I’m just playing around learning to use GNURadio and trying to decode simple signals from domotic remotes used for things like turning on or off some lights on the house.

First of all, we need the devices used to intercept and transmit signals at the desired frequencies.

There are multiple cheap options to receive signals. You just have to seach for “RTL2832U” (I bought mine for about 5$, but the antenna isn’t very good).

Note that this cheap dongles won’t allow you to transmit. They are good receivers, though, and should be enough to start playing with SDR.

More info about the RTL-SDR can be found on rtl-sdr.com, including a store to buy hardware and multiple tutorials, like how to build or buy an antenna that suits your needs, or to decode NOAA signals to get amazing meteorologic images…

If you’re more comfortable working with radio signals, or you think that you can use it for more projects, you can buy a transceiver for a couple of hundred dollars, like the HackRF One.

The only needed software will be GNURadio, but you can use any program to locate and take a look at the received signals. Two popular options are GQRX and SDR#, but there are hundredths of other useful programs.

I’m going to work with the remote I had on my home: EM_MAN-001 , made by Dinuy1. On the linked page there are a couple of characteristics of this remote; but the interesting ones are (translated from spanish):

So, just looking at that table provided by the manufacturer, we know two essential things: the frequency and the modulation. We could figure those searching on the spectrum (usually, these remotes use the 433 MHz ISM band) and examining the wave (again, these remotes usually modulate with On-Off Keying - OOK).

Intercepting and analyzing the signal

Once we set the receiver tuned to 433’92 MHz, we should see something similar to this on GQRX:

And looking at the recorded WAV file using on Audacity, we can see a very pretty signal:

The WAV file with the recorded signal can be downloaded from here.

Retrieving the data by hand

On the capture there are three different button pulsations:

These kind of devices use this simple encoding to avoid losing information (as those bands have a lot of interferences), and is pretty common for the information to be repeated multiple times, like on this remote, where the packets are repeated after waiting one or two periods.

I used Python to automate the process of decoding the recorded signals (although I found that GNURadio was better for the task), extracting the following data, to study the protocol: 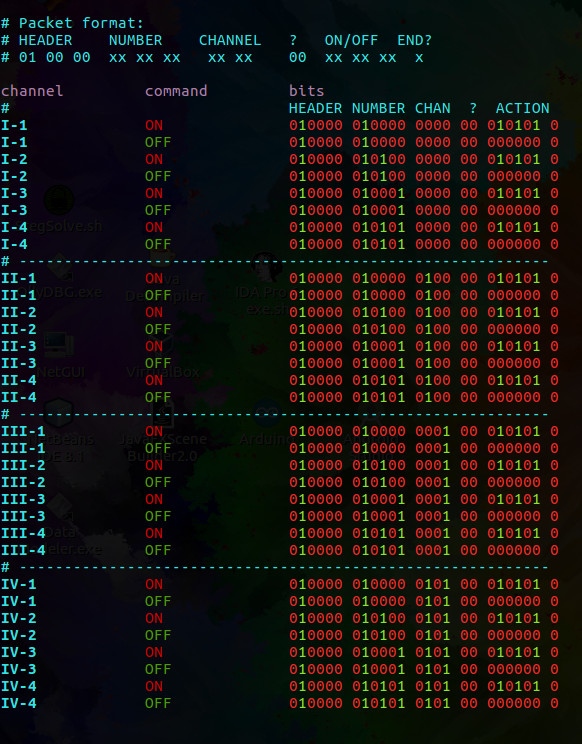 As a side note, I made a little syntax file for vim (as can be seen on the image above), that can be downloaded from here. To use it, create a .vim.custom file on your working directory with the following content (or add it directly to your .vimrc, or however you prefer to do it…):

Also, even though the main purpose is to use GNURadio, I’ll leave here the code (Python2) used to extract bits from the WAV recording, that I used before learning about GNURadio. To know more about its usage, simply execute ./decode.py --help.

Now that we know everything we have to know about the signal, we can start using GNURadio to analyze or decode it in real time. I’ll take for granted that you have some basic knowledge of GNURadio or Digital Signal Processing (I’m not an expert either… just some basic concepts are enough to follow this part).

To learn more about any of those subjects, there are a lot of useful tutorials on the internet, like this series about DSP, made by the creator of the HackRF, or this other series, from the GNURadio wiki.

From now on, I’ll be working with this IQ file, captured using GNURadio, for it’s simpler to work with it than to plug the dongle.

Getting the digital signal

The captured signal is modulated on AM. That means that we have the carrier wave (at 433 MHz), but we have to recover the original signal to start decoding. As the modulation method used is very simple, we can simply use the Complex to Mag^2 block. Also, a Threshold can be used to reduce the signal to a perfectly squared wave.

This first flowgraph (with a widget to tune the frequency) can be downloaded from here: 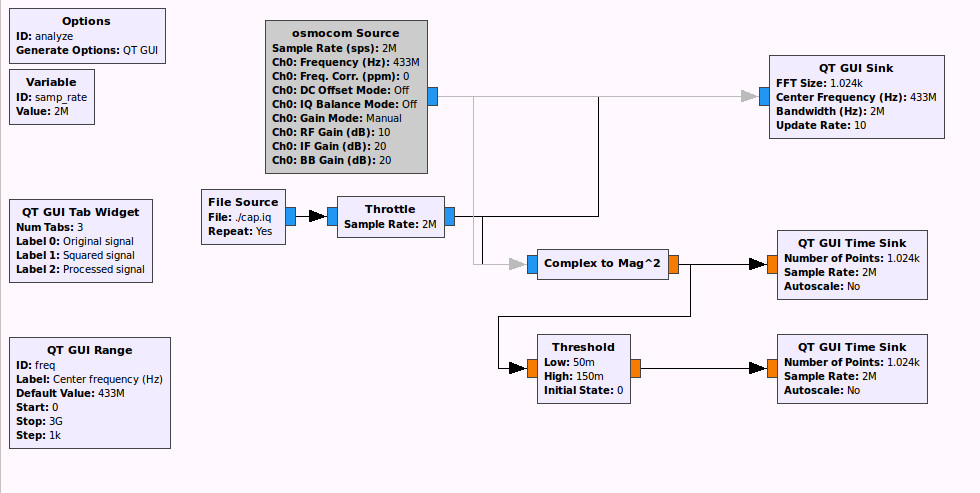 For now, we can only view the digital signal (along with the different stadiums while processing the captured wave). We can also add a band-pass filter to reduce noise.

To accurately retrieve data from the signal while it’s been captured, we have to get some statistics, like the baseband frequency (to know the number of samples per period, so we can distinguish between long and short bursts). To do so, we can use the previous flowgraph along with a custom block whose code can be downloaded from here, and add it to the output of the Threshold block, as shown on the image: 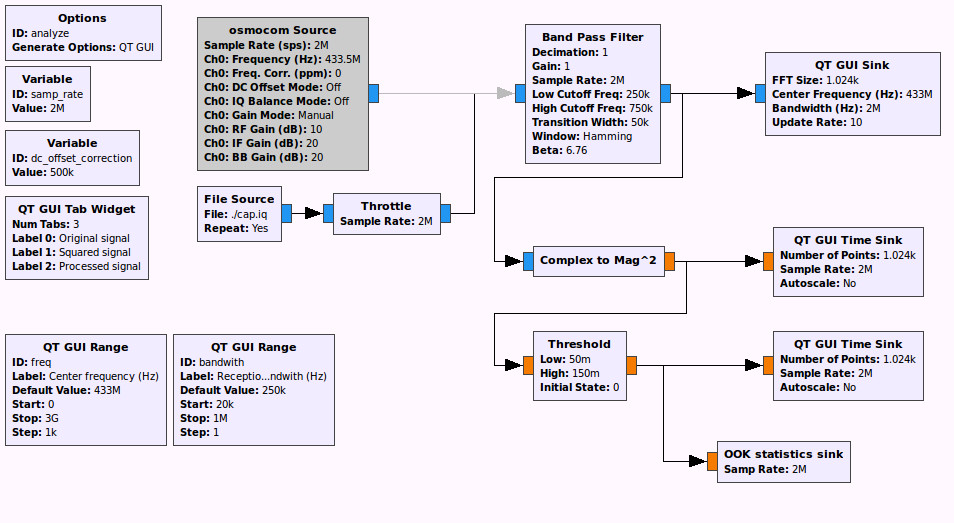 This new flowgraph can be downloaded from here.

An example of the output may be like the following:

Now we know the baseband frequency, 675’9 Hz, and we can start decoding the data on the fly, as we capture signals.

To decode the data, I’ll substitute the statistics sink for another custom block to dump the bits on STDOUT. I guess there may be a simpler method to dump the data, but I chose this one because Python is a language where development is very fast, and I didn’t know how to do it with the available blocks.

This flowgraph can be downloaded from here. This is an example of it decoding packets in real time:

Finally, we’ve arrived to the cool part!, where we can play with lights / doorbell / whatever-your-remote-is-for …

If you have one of the RTL-SDR dongles, you won’t be able to transmit; but there are a lot of cheap alternatives to the HackRF (that I’ll use for transmitting) out there. The HackRF and other similar transceivers are expensive because of the wide range of frequencies they can handle; but little chips that transmit on 433 MHz should cost about 5-10$. I haven’t tried it, but I guess it could be easy to use an Arduino or a Raspberry and, along with one of those chips, synthesize the desired signal.

Anyway, there are two methods to impersonate the remote: replaying the captured signals, or creating our own signal and broadcast it for the end point (the light, the doorbell, etc.) to receive it.

Replaying the signal is a very easy method. We just have to store the signal into a file and then, use that file as a source to transmit.

It’s not the better method, as we’ll have to capture every possible value, from every one of the different buttons, and this method doesn’t scale. When you have more than three or four buttons, it starts to get boring. Also, we should be careful with the parameters (frequency and sample rate), to replay the exact same signal we received.

The flowgraphs are very simple. 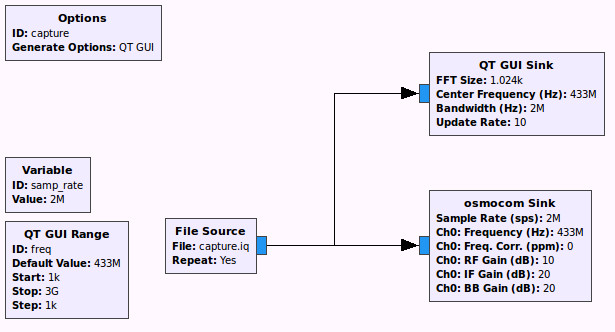 For the other method, synthesizing a signal, I’ll create another post, as it requires a longer explanation and this post is already too long.